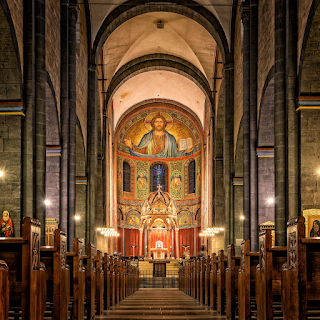 What do I mean by traditional church? I mean what I assume most people think of when they hear the word church; Sunday mornings sitting in pews, singing hymns, and listening to a twenty-minute-plus sermon. Traditional church also includes some form of Sunday School for children and adults, and then some form of service/charity work in the community. In the traditional church, 80-90% of the energy put forth by the pastor and staff goes toward worship and discipleship, while a much smaller percentage goes toward charity and justice work.

I think it's time to begin rethinking this "traditional" model of being the church. Why? Because it appears that this model of church has quit being relevant to the majority of people in the United States. According to a 2020 Gallup poll - before the pandemic - only 47 percent of those in the US said they attend a place of worship. That is less than half, a sharp decline from Gallups first poll in 1937 which had seven out of ten people claiming to attend a house of worship.1 Traditional church has been in decline for years and the pandemic has only served to accelerate this trend.

I think it's clear to anyone who is paying attention that the world has changed and is continuing to change at a speed that has likely never been seen before throughout history. Yet the church has been extremely slow to change itself. I don't mean to say that the church needs to change its theology necessarily, but the way we share the timeless truth of Christ's life, death, and resurrection should change with the times. But at the same time, how do we do that in such a way as to not alienate those who have grown up with traditional ways of worship and still find great meaning and relevance in it still?

I have been spending a lot of time lately reading and exploring this idea and I find that I have more questions than answers. I was attending an ecumenical church conference called Mosaix a few weeks ago and one of the sessions I was a part of talked about a model of doing church that flips the traditional script of the church on its head. The traditional model says, let's produce amazing worship with great music and preaching so people will want to come to our church, then we can plug them into small groups to help grow them as disciples so that they can go out into the world to serve and bring more people into worship. This new model flips the script by suggesting that instead of spending eighty percent of our energy on worship, we spend eighty percent of our energy on serving and building connections outside the church, then bring them into small groups, and then worship. Traditional worship is the last thing to introduce people to instead of the first. It's an interesting thought. This is called a missional model of church.

I was reading an article from NPR today, which is where I got the information about the Gallup poll results mentioned above. The article is titled, "As attendance dips, churches change to stay relevant for a new wave of worshippers." The article talks about how many people looking for faith communities are burned out by traditional religion and how traditional church isn't connecting with everyday people. The article focused on a faith community called Battlefield Farms. It's a faith community centered around a community garden where folks come together to feed others. They also pray and sometimes worship around a campfire. The thing I found interesting about the article was that the church's center was around building a community around service. Worship and bible study are part of who they are, but it isn't their primary focus.

I was listening to episode seventeen of the Church is Changing podcast yesterday and they were talking about the changing church as being smaller, more relational, and centered around the community outside the walls of the church building. They talked about Pastors changing their role from primary doers to facilitators, permission givers, and equippers of lay-led ministry. I'm intrigued by this and would love to engage in conversation around this idea. You can listen to the episode here.

Anyway, these are some of my initial thoughts about rethinking the traditional church. I plan to begin engaging my congregation after the first of the year in these conversations. I believe God is doing something new in the life of the church, I just don't have it all figured out. So I look forward to the ways the Spirit will speak through these conversations. Feel free to comment below.